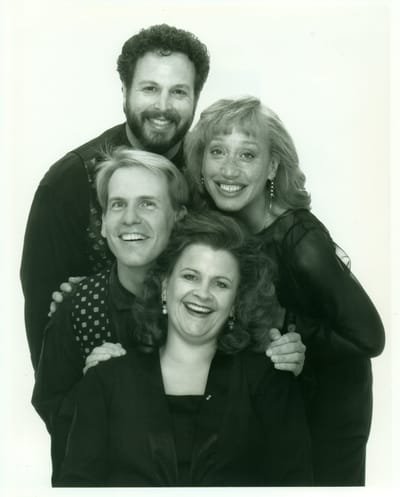 Cabaret Theatre is the dream-come-true of Omaha’s Rebecca Noble.  The daughter of a professional singer, Rebecca was raised on the music of Cole Porter, Irving Berlin, and George Gershwin, and the desire to perform that style of music has always been strong.

After teaching music and drama for twelve years, Rebecca decided to try her hand at a professional acting and singing career, spending two years on the road in the national tour of The Sound of Music, in addition to  regional tours and stock theaters.  During that time, she discovered that “cabaret” shows were resurfacing in many of the major cities across the United States. These shows combined theater and music in an intimate, exciting way and usually took place in upscale hotels or clubs.

Hoping to bring that type of offering to Omaha, Rebecca approached several hotels in the area regarding the possibility of staging Closer Than Ever, a little-known musical by Maltby and Shire.  The Regency Marriott Hotel was favorably impressed with the concept and agreed to allow Rebecca to independently produce the show in Gambit’s Lounge.  Rebecca called on three of her favorite singing friends, Camille Metoyer Moten, Paul Tranisi, and Jerry Brabec to join her in offering the Midwest premiere of the show. Together, they performed for eleven weekends at the Marriott and in December of 1991, the Marriott asked that a second show be produced.  The result was The Nearness of You, an original revue celebrating the nostalgia of the 40s.

The rest is, as they say, history.  Since the premiere of The Nearness of You in 1991, over 30 additional original revues have been produced. With their superb solo voices and incomparable blend, this harmonic ensemble is equally comfortable with the American Songbook, vocal jazz, Broadway and contemporary cabaret.

The artistic strength was their rapport with the audience members. They entertained people of all ages. The stage performance was super. The choice of music was ideal according to the holiday and theme of the dinner theatre. The variety of love songs from the 30s through the 80s pleased the audience when they heard their favorites. Atkinson-Stuart Arts Council

They sing wonderfully, look great, and on every occasion we've heard them, strike that chord of feeling and love which exists in us all. Highly recommended!  Jackson and Almeda Berkey

Whether it's interpreting the lyrics of Cole Porter, Harold Arlen, or Stephen Sondheim, their connection to the audience is immediate, evidenced by each nuanced phrase and stunning vocal jazz harmonies. A variety of shows is available throughout the year, including an Andrews Sister salute, a Valentine's Day show, and a yearly Christmas cabaret.

Cabaret Theatre has raised the performance yet another notch. Those who attended the Valentine special hosted by the Butler County Arts Council found the performance "off the charts." While having very individual styles as soloists they are still able to blend seamlessly in their group numbers. Another strength of the group is the ability to project their voices without sounding harsh or brassy. The very live  acoustic space of the Thorpe Opera House in David City was a perfect place to showcase their voices without the need for electronic amplification. The pianist was exceptional when the group was not performing a cappella.  Butler County Arts Council